Calm and peacefulness are the words that I use to describe this place. With this serenity and quietness, one could hardly imagine the astounding spectacle taking place thirty stairs down, from highway number 4 (National 4).  From the top of a cliff, powerful waterspouts fall on the rocks below in a deafening noise.

The Metche falls are located 10 minutes from Bafoussam, the capital of Cameroon’s West Region.   Little known outside of the local community, the Metche tourist site, considered an important place of worship, is signaled to road travelers by a single plate surrounded by weeds. Many would pass by without even noticing it. 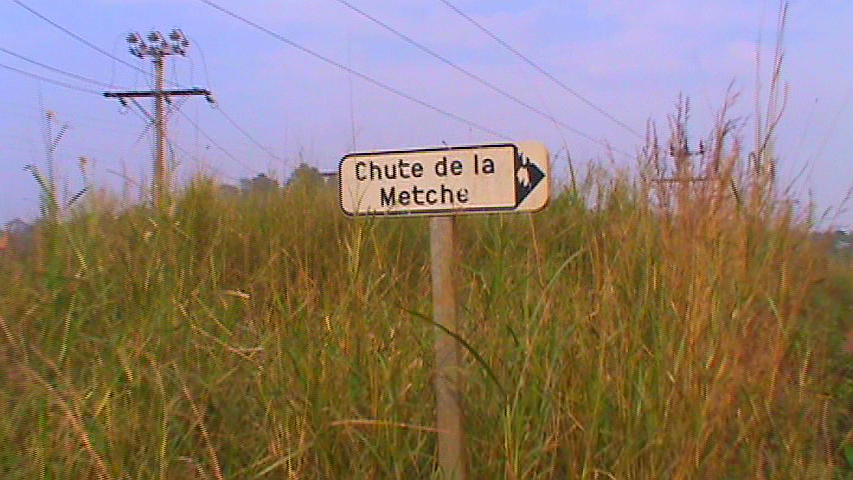 Pilgrims arrive here barefoot, with empty containers that will be filled with the river’s sacred waters. They pour salt and palm oil on the ground at specific spots from the moment they enter the site. Then, they move downstream and get inside the waters in order to offer their sacrifices. These rituals, proper to the Bamileke people, allow them to connect with ancestors, ask for purification and seek their protection and intercession.

A man that appeared to be a site keeper (he was sweeping around at the time we met him) escorted us upstream where several men and women were candidly  taking  “ritual baths”, in order to free themselves from any spiritual impurity or bad luck. The man explained that on this same area, colonialists used to bring resistance and independence fighters also known as “Maquisards” in order to execute them. Hundreds of thousands perished here, for the rocks downstream left them no chance of survival as their bodies came crushing down and were swept away by the current. The killings stopped with one man named “Defo”, who managed to drag one of the colonial masters, a chief commander, with him while plunging. Their bodies were never found. “Fossi”, who survived the tragedy on that day, escaped and lived to tell his companion’s courageous act to the rest of his people. Did someone say historical heritage?

Without a doubt, this is a place of great beauty that should be aggressively marketed. It is not yet the case and the indigenes themselves are taking care of the site, because of what it represents to them. One could argue that developing tourism on this site would destroy the natives’ culture and traditions. But the case could also be made for a strategy that would be beneficial to both the locals through the preservation of their cultures and traditions while the touristic aspect is also enhanced.  Indeed, if a very small number of outsiders are tolerated for now, it is not certain that they would still allow it with open arms if more people got involved. Let’s not forget that we are talking about a place where people go to get purified, connect with their ancestors and find solutions to their problems. It is true that our impromptu guide told us: “Ici, il n’ y a pas de honte” (“Here, there is no shame”), but how many of those locals would keep bathing in front of a swarm of tourists? And how would those tourists react to that scene? To solve this issue, access to the bathing areas could be restricted.

What do you think dear readers? Bearing in mind that the importance of the role the Bamileke* resistance played in Cameroon’s quest for independence has often been downplayed or even ignored, don’t you think it would be a good thing for the Metche falls, this thing of beauty, to open up to the world, so as to generate revenues for the local community? Shouldn’t the story of Defo and Fossi to be known, so that the Bamileke people can find their righteous place in the history of Cameroon? But then, do you think local beliefs would survive such a shock? What is your take on this topic? Please, let us know!

*Bamileke: native people of the western region of Cameroon